U14 Boys Through to Second Round of DMBB Cup

Killester BC vs UCD Marian BC

Killester started strong, getting their first basket within the first few seconds. They put another couple of points between the two teams before UCD scored their first points. UCD started to come back, leveling the score with a few minutes left. The score remained level until the last few seconds, when Killester got a fast break ending with a layup. The score at the end of the first quarter was 12-10 to Killester.

Killester recovered in the third quarter, retaking the lead, but only barely. They were ahead by just one point at the end of the quarter.

The fourth quarter remained tight, the two teams trading basket for basket. With just a few minutes left in the game, UCD were ahead by three points, but Killester didn’t give up. They played some very good defence and scored several baskets from fast breaks. With only a few seconds left, Killester were up by two points. They made the most of their last offense and extended their lead to four points.

It was a very close match and remained tense from beginning to end. Both teams played well but Killester came out on top in the end. 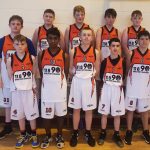