The Pyrobel Killester Women’s Super League team faced a Cork opponent for the fourth week in a row when they headed down to the Parochial Hall to play SIngleton SuperValu Brunell on Sunday afternoon.

It was the last game before the Christmas break for both teams, and they certainly earned their time off by putting on a shooting match that meant they couldn’t be separated with 81 points a piece at the final whistle, and leading into overtime play that had the Killadies win by 2 points.

Congratulations also to Adella Randle El who was named MVP!

The next WSL game is at home in the IWA vs Liffey Celtics on Saturday, January 4th at 7pm 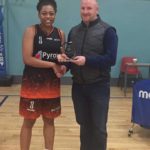